AKA is more mature than Murdah – says Zinhle

AKA is more mature than Murdah – says Zinhle. DJ Zinhle’s latest episode on The Unexpected saw her making a revelation that Murdah Bongz does not exactly understand this whole blended family set up. Especially because Kairo Forbes’ father, AKA apparently wants to be a part of Asante’s life. 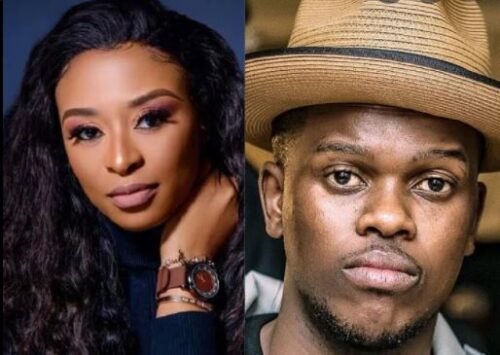 Blended families can be a tricky situation but DJ Zinhle wants every person involved to get along. In her endless quest of revealing her pregnancy to everybody close to her, the DJ shared her pregnancy news to AKA, her baby daddy.

The two might have had a fallout numerous times but they have mended their relationship and have an awesome co-parenting relationship.

So when she announced the news, we anticipated a positive response. AKA was very happy for Zinhle, as revealed by Mama kaKairo, and he said he hoped Zinhle would give birth to a baby boy.

Zinhle shared that AKA teased her a bit and called her a rebel for having a baby with another man in the same industry as theirs. It was all laughs though and AKA did not mean no harm.

Now the main concern for Zinhle is the reluctance from Murdah who is not amped up to get along with AKA as yet. Reason being, AKA apparently wants to be a part of Asante’s life, the same way Murdah Bongz is a part of Kairo’s.

The Era by DJ Zinhle founder shared that she thought AKA was going to be the one who is difficult, but it turns out, her bae Murdah is the “difficult” one. Hopefully in the end everyone gets along.

In previous episodes, Zinhle revealed that she hopes AKA and Murdah would get along for the sake of their children. “So that is the hardest question. So how am I going to blend Bongani and his kid with me.

“So how am I going to bring Bongani and his kid with me? So there’s Kiernan and Kairo on this side and Bongani and his child on the other side. I need to find a way to make Bongani and Kiernan get along. That’s the only way this is going to work,” she said.

I was hoping for a boy

Her viewers’ reactions are kind of what we expected, with some saying they do not trust AKA.

We saw the way the two have patched things up as Zinhle urged her fans to support AKA’s businesses and AKA also hyped her up as she performed at his gig.

AKA booked Zinhle to play at his Super Soft Sunday party at the Huula Beach Club in Germiston and she rocked the crowd. He retweeted tweets which spoke positively about Zinhle. This did not get received well by Zinhle’s fans who told AKA to back off a bit.

A troll said AKA should f**k off but his fans hit back at him. One said, “It’s his event. He’s quoting tweets of everyone who’s performing there. If he had decided quote tweets of everyone BUT her, you still would have probably had a problem right??”

Another said, “Lol you people are weird and fu** up. I feel sorry for kids y’all be raising with this mindset. What a sad and miserable generation y’all are.”