Controversial Sangoma Gogo Skhotheni ready to marry her third husband. The traditional healer Patricia Motsoeneng has made a startling revelation, claiming that her ancestors permitted to marry a third husband. 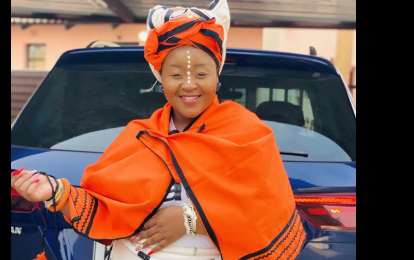 Motsoeneng, who hosts the reality series Gogo Skhotheni on Moja Love, claimed that she receives a ton of direct messages from men who are pursuing her on social media.

The attractive woman reportedly told a local media that the television show is all about enjoying her life and experience as a young sangoma.

Motsoeneng, a 30-year-old mother of six kids, is proud to practice polyandry; she just disclosed her second marriage and indicated there is a chance she will obtain a third and fourth.

Although she was born in Secunda, the attractive sangoma currently resides in Mpumalanga, and she added that criticism doesn’t upset her because she didn’t chose this career route on her own.

“I was chosen by my ancestors at the age of 20, I did not believe in any of what I do today. I was a staunch Christian, so when I would dream of beads and rivers I would pray or report to my pastor until I realized that it was not demons, but I had a calling,” she said.

“So, I consulted my ancestors and they told me what they wanted, and I agreed. My husband did not understand at first, but we are getting there. I am ready for all the hate and backlash from Christians, they do not bother me at all.

Also Read – Patrick Shai died a heartbroken man – Sad details emerge as his wife, Masechaba is exposed for cheating on him

“If anything, Christians are lost because the bible says if a person believes in something they must do it wholeheartedly. I am still a born-again Christian, I just do not judge people.”

As usual, the path to becoming a traditional healer is not always easy and the young woman is no exception, she stated that having Amathwasa is demanding.