‘Easy money is not good money’: Klein Karoo siblings return wads of cash they saw spewing from ATM
Two Oudtshoorn siblings resisted temptation and turned a blind eye to more than R10 000 in cash spewing from an Absa ATM in their Klein Karoo town last week. 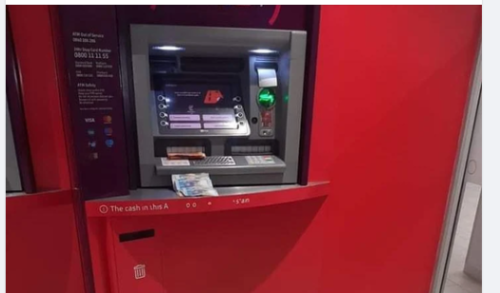 Instead of pocketing their find, teachers Alysia, 32, and Shane Mowers, 28, called the police to inform them about the cash.

The siblings were on their way to a local bank in High Street to withdraw money for their mother, when Alysia encountered the ATM spewing R50, R100, and R200 notes onto the floor.

Alysia said when people then started arriving at the centre to use the banks and saw what was happening, she told them the ATMs were not working and the police were on their way.

According to her, one local told her, “Just collect the money”, but she sternly replied, “No, I’m not touching the money; it’s wrong.”

Alysia said: “We are still in shock; it’s like something out of a movie. My friends were all very upset with me for not calling them to tell them what happened, they even said that the money was worth petrol for an entire month.”
“The next day when I went to work, I told the kids about what happened to me, their mouths were practically hanging on the floor with amazement,” she said.

When asked what she thinks happened, Alysia said “the bank manager explained to me that he thinks the person that deposited the money did not wait until the money was correctly deposited into the bank. So maybe that was the case in this incident.

“That money could’ve been someone’s bond payment, or car payment, and I really hope they followed up on their deposit because life is already difficult and to lose a deposit to that value can be very heartbreaking.”

“Absa can confirm an incident involving an ATM occurred at the Absa Oudtshoorn branch on the evening of 19 July 2022. A thorough investigation has revealed that the returned cash was due to an incomplete transaction, rather than an infrastructure malfunction.

“All the notes returned have been recovered and Absa has engaged all the parties involved, including the customer who reported the matter. This is an isolated incident, and we always advise customers when transacting using an ATM to always ensure their transaction is completed fully before walking away,” said Malesa.

Police spokesperson Malcolm Pojie said no case was reported to the police.

“It is alleged that the person went to withdraw money and then found cash within the machine that she did not withdraw. Police also only learnt about the incident through social media,” he added.