Heartbreaking video of man being heavily beaten up by his giant girlfriend. Gender-based violence is one of the biggest problems Mzansi is battling with, with most victims being women and children. 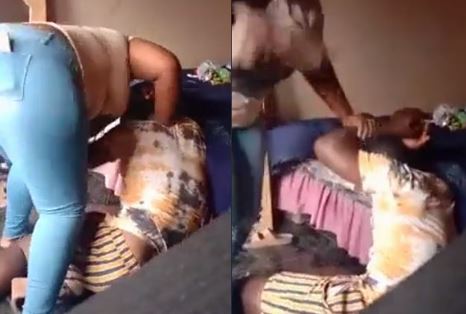 But a video is doing the rounds of a man being beaten up by a woman, causing anger on social media.

Many people have called for her to be arrested.

The woman can be seen bashing the helpless man with a shoe on his head, punching, slapping, and kicking him, while another woman on the other side can be heard laughing like she’s watching a comedy show.

It is not clear what led to the man being beaten by the woman believed to be his girlfriend.

As she throws punches and slaps him, she can be heard saying “I’m tired of you.”

The man was praised for not fighting back, with some saying had he retaliated, he’d be the one in the wrong.

On Twitter, PK ya gamoers said: “I respect this man for not hitting back. It takes a lot for a man to calm the beast within. Keep your head up King Crown and I hope you leave that woman before you retaliate and get arrested for having to defend yourself.
Fourth Wave said: “Not that the man doesn’t want to fight, he knows if he can fight back, he will get arrested.”

SG said: “He is smart and police won’t even ask his side of the story, they will take him in.”

Pablito tweeted: “Had he moved and she missed and fell on the ground, he would be in prison for GBV. He did well absorbing those blows, I hope she does not open a case for feeling pain on her hands when she smacked him.”

BlackSAM Brand said, “My guy just avoided jail term by just staying down and covering his face. Black man, you are on your own.”