‘I was sleeping with Kelly and Amanda Dupont at the same time”- Jub Jub makes shocking confession – Video. Jub Jub’s interview on Podcast And Chill with MacG did not disappoint as he delivered exactly on what he promised. Social media is currently buzzing with Jub Jub, Kelly Khumalo, Amanda DuPont, MacG and muthi trending. 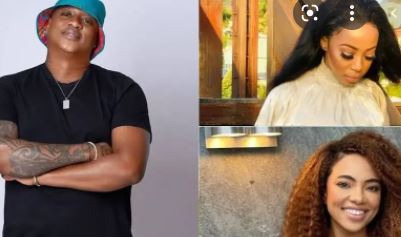 For those who did not know about Jub Jub and actress Amanda DuPont’s relationship, it came as a shock to them when he addressed this. It was what he said afterwards that made our jaws drop.

According to the Uyajola 9/9 host he would have never chosen Kelly Khumalo over his ex-girlfriend Amanda in his sober mind. Therefore he indirectly accused Kelly of having a hand in their break up. Seeing how he only wanted a “hit and run” type of situation with the mother of his child.

“When you look at it, growing up I was living a guy type of life, so when you look at me, you have Amanda Du Pont, and you have Kelly, the equation was not adding up. Do you understand what I’m saying? So there was no way that I would have gone for Kelly over Amanda,” then MacG and Sol Phenduka, the hosts agreed with him and they added, “In your sober mind.”

Jub Jub then takes it up a notch and spoke about the first time he slept with Kelly and that was after a party hosted by Zizi kodwa at Taboo.

Jub Jub explained that this was supposed to be a once off thing but ten his muthi allegations were brought up, and had viewers thinking she might have used it on him. “Everybody knows that Kelly uses muthi,” he alleged.

Jub Jub then went on to say he f***D things up with Amanda and he believes they had a good thing going.

If you may recall back in 2014, on Real Goboza, Amanda Du Pont made some shocking revelations about her relationship with a famous ex boyfriend which she never named. She said she was raped by the unnamed ex but she had forgiven him.

“He started raping me too. I’d refuse to have sex as I was tired or didn’t feel like it, but he’d force himself on me.

“By then I was falling out of love with him, but I still didn’t have the guts to leave. Rape in a relationship is horrible. You don’t understand that a person who claims to love you can violate you like that.”

Amanda who was a presenter at the time, said she had learned to forgive him and move on from that, “Sometimes I’d bump into him at functions, but that didn’t faze me because I had moved on,” she continued. “He was in a relationship with a famous musician by then. I can honestly say I have forgiven him.”

Moving right along from Amanda Du Pont, Jub Jub then spoke about his son and how he had been trying to get a hold of Kelly Khumalo to talk things through so he can be in his son’s life.

There’s nothing wrong with using #muthi

Jub Jub must be very careful to label that as #witchcraft

I’m not saying Kelly is NOT a witch,she probably is

Or Jub Jub is the witch or both of them – I don’t know,but

Also Read – Hours Before Jub Jub’s Interview With MacG About Kelly Khumalo, This Happens To Her

Jub Jub then let the crew listen to an unread voice note he sent to Kelly Khumalo where he reaches out to her but said she never responded. The voice note is as follows: “I am going to try and keep this as short as possible, I am not okay. I have also recently come to witness certain things that are not good regarding my situation with my boy. Please, I need my boy, my boy needs his father. Can we meet at your soonest convenience and see how we can address this issue and any other issue that you wish to address.

“I would just like for us to put out differences aside for the sake of our son. Amongst other things, I was dealing with a lot of things that I did not want to disturb this process. Please, please get back to me as soon as you can,” he said in the voice note.

Jub Jub tried to reach out to Kelly Khumalo so he can see his son but she refused, this is heartbreaking 💔 #PodcastAndChill #macg pic.twitter.com/UT5RPn1sOT

This interview played on Channel O last night. The full interview will be uploaded on MacG’s YouTube channel in the next coming days.