Its the end of the road for DiepCity. Mzansi Magic’s DiepCity has reached the end of the journey. According to Daily Sun, Black Brain has confirmed that the show has been canned, after airing for two years. 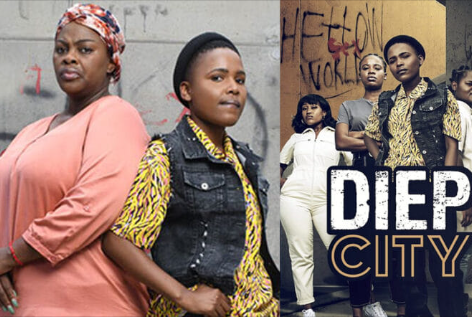 In a statement sent to the outlet, Black Brain said the show was slated for two years and the contract is nearing its end.

“DiepCity has always been envisaged to be two years production in partnership with Mzansi Magic and now the contract is nearing its end. A deliberate and strategic move by Mzansi Magic, to offer viewers a dynamic show that would keep them glued to their screens and secure that slot,” read part of the statement.

Black Brain Creative Director Mandla N has thanked avid watchers of the show for making it a success.”DiepCity has been hit on South African television and has introduced audiences to unique characters who have resonated strongly with fans. DiepCity fans have played a big role in the success of the show over the past two years and we are thankful for their support,” he said.

The best thing that has ever happened to SA television 🎥🎥🎥🎥 pic.twitter.com/LvU4S8a1Ew

Isibaya was replaced by DiepCity after Mzansi Magic canceled due to its declining viewership. Nomsa Pholiso the channel director for local entertainment channels at M-Net, announced its cancellation, leaving loyal fans disappointed by the decision.

The best thing that has ever happened to SA television 🎥🎥🎥🎥 pic.twitter.com/LvU4S8a1Ew

“It’s always sad when a show that was popular and loved ends, as is the case with Isibaya. However, times change and television is about adopting and adapting. As Mzansi Magic, we’re thrilled about the new partnership with Black Brain Productions. The other exciting element is that this is their first telenovela. It’s a great opportunity for Black Brain to broaden their base and creativity,”

Isibaya must come back
With new talents obvious mixed with the old actors…. but they must never leave out mpiyakhe pic.twitter.com/CUhSc3c9bx

Recently, Isibaya made the Twitter trends list after fans expressed how much they missed it. Tweeps sang Nomzamo Mbatha (Thandeka) and Sdumo Mtshali (Sbu) for nailing their characters.

I stopped watching TV shows after IsiBaya was cancelled

Multi-choice shouldn’t have allowed Isibaya to end. I stopped subscribing after. Even when Isibaya had a rubbish storyline it was still watchable. https://t.co/pu5Yc7lmYe

Samkelo_ryt tweeted “Nomzamo Mbatha & Sdumo Mtshali carried Isibaya on their backs for me, their love story looked so real it was so beautiful to watch every single day they had the best of unforgettable scenes happy and not so happy moments.”