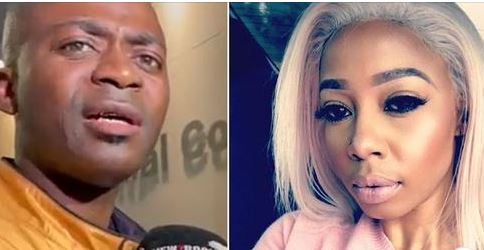 “But she knows who did it and she’s keeping quiet!”
Sfiso Meyiwa, brother of former Bafana Bafana Captain and Orlando Pirates goalkeeper Senzo Meyiwa, said the people who were in the house when Senzo was killed know the truth.

“But they choose to hide it. We don’t know whether they were threatened or what the case is, but the story that they gave us was cooked up.”

“We know who pulled the trigger. Police know it too, but for some reason, they won’t arrest that person,” he said.

“We are still waiting for the right arrest.”

Meyiwa said they also knew the person who shot Senzo did not do it intentionally.

“It was a mistake. But the biggest mistake is that they are keeping the truth away from us,” he told the People’s Paper.

Senzo was killed in an alleged armed robbery at Kelly’s family home in Vosloorus, Ekurhuleni, on 26 October 2014.

Five suspects were busted for his murder. They are due to appear in court in April.

Daily Sun’s attempts to reach Kelly yielded no results. Her phone was on voicemail and she did not respond to SMses.

NPA’s Lumka Mahanjana said the only update regarding the Senzo Meyiwa case was that the accused who have been appearing in court will appear again as the matter is set for April in the high court.

She did not confirm whether anyone else was implicated.