Lasizwe explains what really happened to Ricky Rick & what went through him. It’s not secret that Lasizwe – like many other celebrities – have felt triggered in the wake of Riky Rick’s death. 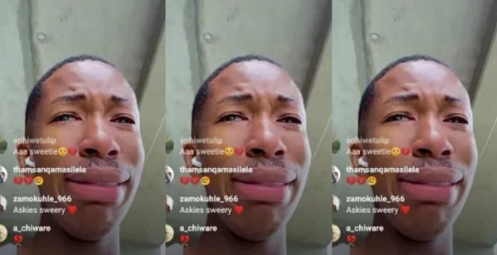 The rapper was confirmed dead on Wednesday, 23 February after a reported suicide.

Having been close friends with Riky, Lasizwe – who has been open about his own battle with depression and anxiety – took the news badly. On Thursday afternoon, Lasizwe had friends, family members and his fans concerned after he went live on Instagram with a video of him having an emotional breakdown.

Lasizwe was cleaning his pool when he seemingly had an panic attack.
He went on Instagram Live to document his experience where he was seen weeping.

Speaking of Riky Rick’s death, he said: “I’m trying so hard not to process this. The fact that he had no-one to speak to. I went through that, I know what it feels like to to die inside and have no-one to talk to and understand”.

“Men are scared to speak out. They feel like they need to bottle it up, they need to drink alcohol, get bad b****yes and thats it.