Makhadzi apologises and explains why she pushed her dancer – Video 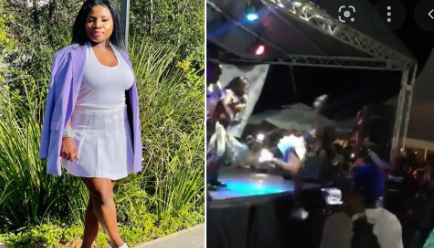 The singer apologised to the dancer and said that they are cool and the dancer is fine.

She further said the situation happened because she was trying to draw the dancer back to her so she doesn’t pour water on stage as they still had more time to perform, and it will not be favourable to them if the stage gets wet.

In a bid to stop her from pouring water, the dancer fell.

The Ghanama hitmaker apologised to people who feel offended by the video thinking she’s a bad person.

Makhadzi further spoke about her forthcoming EP, she said it will be out a week before she performs in Botswana for her One Woman show.

Watch video where the singer explained herself below: