Mzansi drags Mr JazziQ for chasing female fan off stage (Video). Tumelo Manyoni known professionally as Mr JazziQ is being dragged after he was seen chasing a female fan who came to support him on stage while he was performing. 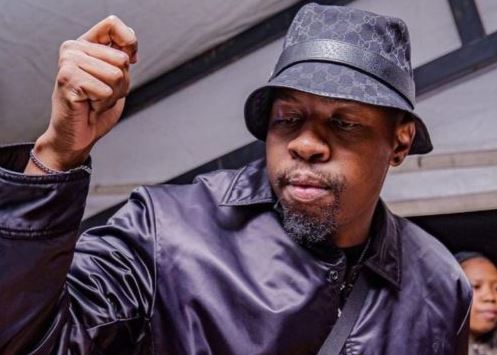 The video has gone viral on social media and it’s left online users divided, as some accused the DJ of being rude, while others defended him.

A tweep said the music produer is rude; in response, a fans said: “JazziQ is not rude y’all expect celebrities to not be human and unfortunately they are. JazziQ is also doing his job and she is disturbing him. But that’s just my opinion.”

I don't see anything wrong that JazziQ did here, this girl was being weird and he felt uncomfortable.
Angith that's what you say when the genders are reversed. https://t.co/v99r0DqwD4

Devastating blow for the Amapiano star as Twitter user Bekezelani is no longer a fan of Mr JazziQ https://t.co/erA1nRYQZn

He started by laughing at a fan on a insta live because she wasn’t as good looking as he’d wanted her to be, now same jazziQ is looking at his other fan like this? He could have just smiled n carried on. He is RUDE https://t.co/7MBUERz9cY

JazziQ wa lona he’s so mean bathong I mean that was so unnecessary 💔😭😭😭 https://t.co/PTTRNfpzVd

I hear y'all saying JazziQ is rude. But you guys don't know what happened before the clip, JazziQ is not crazy to just look her like that for dancing. Obviously the girl did something wrong and it annoyed him. Don't judge the broe we all know JazziQ is a good guy. https://t.co/tekJSbkUzu