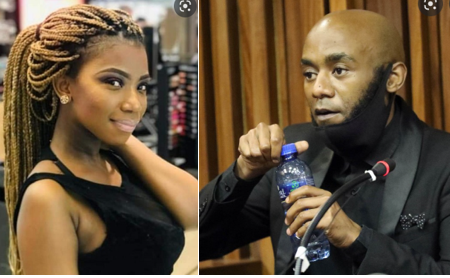 “You will spend the rest of your natural life in prison unless the parole authorities consider you fit for release in the fullness of time,” said Johannesburg high court acting judge Stuart Wilson.

The 28-year-old Pule, from Soweto, was eight months pregnant when she was shot dead. Her bloodstained body was found hanging from a tree in the Durban Deep area of Roodepoort in June 2020. A rope had been tied around her neck and looped over a branch and her body hoisted aloft.Her family last saw her when she went with Shoba to buy clothes for their baby. She later sent them a text message saying she and Shoba had argued and she was returning home.

CCTV cameras captured images of her leaving Shoba’s apartment block in a grey Jeep on June 4 2020. She was not seen again until her corpse was found four days later.After three days on the witness stand, convicted murderer Muzikayise Malephane on Thursday finally told the court how he murdered the heavily …
NEWS6 months ago
Shoba was caught after the hitman he hired, Muzikayise Malephane, was arrested.

Malephane confessed to the crime and implicated Shoba as the mastermind, saying Shoba had wanted Pule killed because he was afraid his fiancée would find out about his affair with her. Malephane pleaded guilty to the murder and is serving a 20-year sentence.

Shoba was convicted in March after damning evidence from police including cellphone records which showed he had called Malephane 23 times the day she went missing and the hitman’s testimony that they had made a prior attempt to kill her.

The prosecution also led evidence on a series of WhatsApp messages between Shoba and Pule showing that he was absent, did not care about Pule’s wellbeing nor the imminent birth of their baby girl.

It was also revealed this was the second time Pule had been pregnant with Shoba’s child. The previous pregnancy was aborted. One of her emotional messages read: “I know you don’t want this child but I was not going to live with myself [if I aborted after the three month mark]. I felt God was going to punish me for doing that…Sorry for ruining your plans – I did not mean to.”

Violence against women is endemic, and the pandemic has made it worse
Women were dying at the hands of men long before coronavirus came along, and it keeps happening. What are we doing about it? Leonie Wagner speaks to …

Wilson, who found Shoba guilty in March, did not mince his words when handing down the sentence.

“The shock and trauma Mr Shoba apparently experienced [an argument offered in mitigation of sentencing] do not in themselves bear on the sentence to be imposed.

“This is especially so because in my judgment convicting Mr Shoba I found Ms Pule’s murder was premeditated,” he said.

As a result, he said the criminal law amendment act required him to sentence Shoba to life in prison unless there were circumstantial and compelling circumstances to justify a lesser sentence.

“He contracted another to carry out the killing.

“That Ms Pule was pregnant when she was killed is also plainly very aggravating, as is the degree of planning and persistence Mr Shoba demonstrated in bringing about Ms Pule’s death,” the judge said.