Pearl Thusi’s circulating video which is showing her priv@tes.The internet is ablaze over Pearl Thusi’s privates showing off during a steamy sex scene on her recently released new Netflix original movie, Wu Assassins: Fistful Of Vengeance. 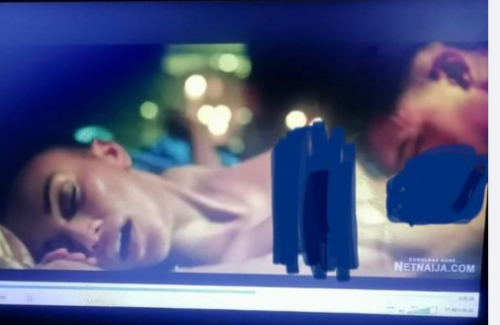 Fortunately, the South African actress gave her fans a heads up on the said explicit scene.

Pearl Thusi’s sex scene has divided the internet with many still attempting to come to terms with her explicit parts showing off for the public.

She had earlier warned her fans whom she knew would make a big deal out of the scene as they currently are.

“…..please don’t make the whole movie about my s_x scene with @TheLewisTan coz I know y’all. Jokes. So excited! Hope you enjoy it,” she was quoted saying on Twitter last week before the release of the movie.

Little did she know she would later be the talk of town after one user shared the whole contents of the explicit scene on the microblogging site, Twitter.

Watch Snippet Video From Fist Of Vengeance Below;

Pearl Thusi Fistful Of Vengeance Scene Pearl Thusi is, however, not new to such controversy. She regularly shares some of her body positivity pictures on the internet. Some of her fans weren’t surprised to see her revealing her privates for her many.

Meanwhile, just recently, Pearl was again on top of the world after American rapper, actress, and singer, Queen Latifah, expressed her enthusiasm to one day work with the South African actress.

Also Read – SAD: He paid her lobola in January and she died yesterday

Latifah appeared impressed by Pearl’s performance on the Fistful of Vengeance.

In the movie, which was released on 17 February and is currently Number 1 globally on Netflix, and causing waves in the United States, the United Arab Emirates and Brazil, Pearl plays Adaku.