Real reasons why Laz got fired from House of Zwide. Season 1 of House of Zwide ended with bang when Funani discovered the truth about what happened to his late wife Busi and daughter who he thought died, Zokuhle/Ona. 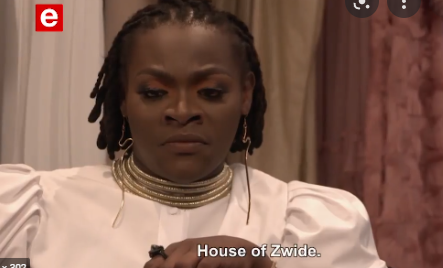 Season 2 came with a lot of heart aches when families got broken and people getting arrested for their crimes.

Things have not been the same since Isaac and Faith got arrested for killing Funani’s family. The Zwide family got broken into two when Zanele came back from London demanding answers as to why Nkosi and Funani have abandoned her mother Faith.

Zanele of course was angry and siding with her mother, believing that she is innocent even with the voice recording of Faith talking to Isaac admitting her crime.

Then the Molapo family losing their head of the house, Isaac and Ona getting hurt and confused by the truth. The long lost daughter had to choose between the Molapos and the Zwides but she ended up with the family she knows, the Molapos.

Faith and Isaac are now out on bail but life is not getting very easy for them. Isaac had to go to Bra Carter for a place to live and depend on Molefe on updates about his family and getting him food.

Meanwhile Faith tried her luck when she went back to the Zwide house but was quickly kicked to the curb when Funani and Nkosi voiced out that they are not happy with her living with them. 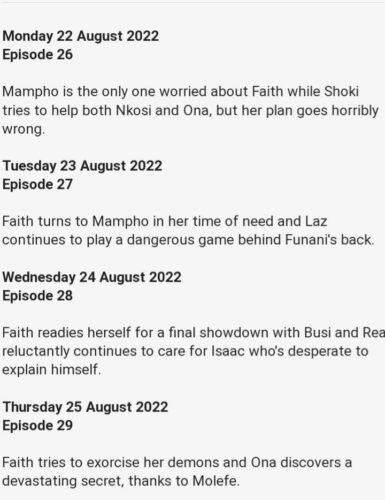 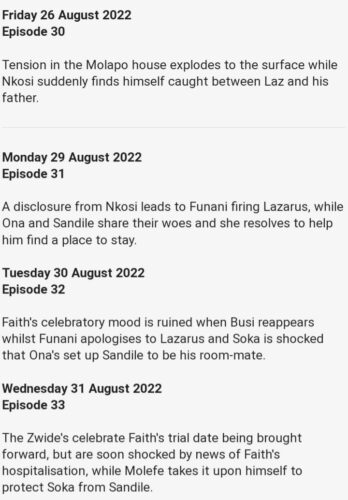 We all know that Zanele went with her mother and invaded Sandile’s space when the moved to the interns’ apartment.

Faith is having even more difficulties when she starts hearing a voice that sounds like Busi. This voice drive her crazy enough to be hospitalized just before she has to appear in court for her crime.

While Isaac has to do a heist for Bra Carter that will back fire on him.

Also Read – Sad 😔: Diep City gets cancelled after only two seasons. SEE WHY