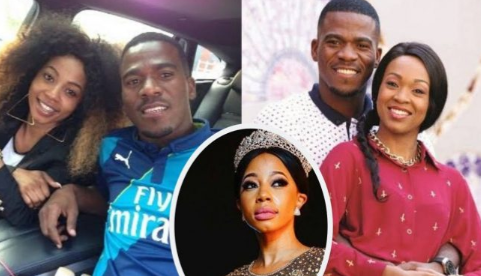 As the drama continues to unfold in the Senzo Meyiwa murder saga, for the first time since that fateful evening, Zandie Khumalo wants to put her side of the story on record.

Zandie Khumalo was one of the people present in her mother’s house when Meyiwa was shot.

Khumalo claims she and Longwe Twala were interrogated for hours after the Bafana star’s death.

Khumalo said, “Longwe and myself were called. The police fetched us at Longwe’s grandmother’ house. We had no problem becasue we wanted to help… We were put in different room, interrogated. Our phones were taken. After that we were sent back home.”

She’s questioning why Meyiwa’s wife, Mandisa Mkhize, and her mother were not interrogated.

In a post that was accompanied with a poster of her interview, she asked why hasn’t Mandisa been named a suspect.

“For the very first time in this country kushona umyeni ushonela [a husband dies] at a girlfriends house yet the wife has never even once been considered a suspect, wake wayizwaphi leyonto [where has such ever happened]??? whether she did it or not the investigation will determine but naye akaphenywe [she should also be investigated] !!!!!!!!!!!” Zandie wrote.

These are the same sentiments she echoed during the interview, adding that Meyiwa’s mother and family should also be suspects.

“No one has ever looked at Mandisa. No one! Why wasn’t Mandisa’s phone also taken? Why is Mandisa not investigated?” she questioned.

According to Zandie, the goalie’s mother hated her sister, Kelly, so much that she allegedly used umuthi to cast a spell called “isichitho” on the Empini singer to get her and her son to break up.

“To what length did she go to make sure this [relationship] does not happen? Is it even possible that she and her daughter-in-law [Mandisa] ordered a hit, not necessarily to target Senzo but to target Kelly?” Zandie asked

Continuing to narrate some of the events after the star’s death, Zandie said she recalled being asked to give more than one statement. She says she’s also had to role-play and do a lie detector test with her mother, Ntombi Khumalo, and Kelly.

Also Read – Actress on being a sangoma!