“She is the new Gogo Maweni’ Singer Zahara is accused of bewitching DJ Sbu as he now looks ‘mentally challenged’.

“She is the new Gogo Maweni’ Singer Zahara is accused of bewitching DJ Sbu as he now looks ‘mentally challenged’. 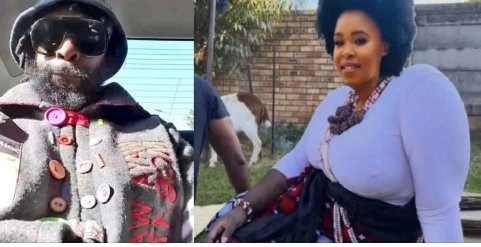 “She is the new Gogo Maweni’ Singer Zahara is accused of bewitching DJ Sbu as he now looks ‘mentally challenged’.A Twitter user posted a rather untidy picture of Dj Sbu. The entrepreneur and artist were casually sitting and facing his camera in the picture.

He didn’t look like the typical rich guy with kept hair and dapper clothes. Many tweeps noted he looks homeless. The tweep captioned the photo with the words, “Uyoze abhatale,” which directly translates to the phrase ‘ he’ll end up paying ‘.“There’s no way Zahara is not engaging in chemical engineering to deal with this fellow,” one music fan Tweeted. Some fans believe DJ Sbu is now mentally challenged.

With these words, the tweeps referred to the money that Zahara and DJ Sbu are frequently quarrelling about. As we all know, when Zahara left TS Records, owned by DJ Sbu, she had a lot of complaints. She accused Sbu of defrauding her of her hard-earned money. Sbu, on the other hand, claims she was overreacting, and the Loliwe hitmaker got what was stipulated in her contract.

Zahara was headstrong and fought the battle for many years. In fact, both of them fought for a long time, leading to a beef bubbling between them. Zahara maintains to this day that Sbu’s record label mishandled her finances. Sbu maintains Zahara should’ve understood her contractual agreement before signing anything.Many people kept making jokes about various things related to Sbu. One is the probability that his energy drink Mo’Faya might be responsible for making him look homeless.

We can not run away from Sbu’s new image with all that was said on Twitter. In the early to late 2000’s he was a clean gent with grooming as a priority. After a while, he started growing his hair and then he got dreadlocks and a beard. Today he is truly transformed. He doesn’t dress as sharp as he used to; he mostly wears what looks untidy but he claims it’s comfortable for his body.

A lot of people don’t know what caused the change. According to the entrepreneur, his mind has shifted from being modern to being natural. He got a new philosophy on life on how to go about living. He is now a person who connects with nature and his inner and higher self. He has also begun hugging trees, so he connects better with nature and improves the natural algorithm in his body

It is not a usual occurrence for people to start dressing like him and all of a sudden hugging trees. People initially accused him of being crazy as they weren’t accustomed to the type of lifestyle he has himself. Walking barefoot in public seems a bit too taboo for most people. Taking it further by hugging trees seems too abnormal for most people.