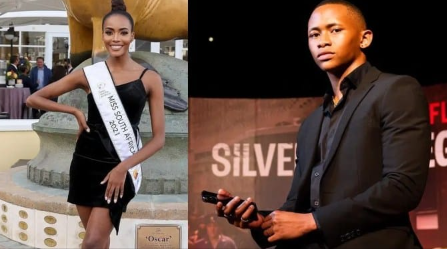 One common thing between Ntobeko Sishi and Lalela Mswane; the young stars are seeing their careers rising like never before. Ntobeko came to light after he scooped Ntokozo role on Gomora.

Since then, Ntobeko has been a fan favourite doing what he knows best alongside established actors like Thembi Seete ‘Gladys’ and Zolisa Xaluva ‘Melusi’ .

On the other hand, Lalela won Miss South Africa 2021, and fame flowed her way. She went on to win more accolades like the Miss Supranational.

The young celebs are known for their preference to keep personal, and love lives private. Like many fans have been wondering, Ntobeko and Lalela confirmed to Mzansi their relationship leaving Mzansi happy.Gomora actor Ntokozo ‘Ntobeko Sishi’ and Miss South Africa 2021 Lalela Mswane confirm their relationship on a date.

Despite having a tight schedule, Ntokozo was busy with his music and Gomora shootings. Lalela is a brand that is always out representing several brands.

A few weeks, she crowned the new Miss South Africa Ndovi Nakeri, giving her some space to breathe. Given that, Ntobeko and Lalela hung out for a date, and Ntobeko had a message to fans as Lalela confirmed their relationship.

Lalela shared the video on her Instagram with Ntobeko on a date and captioned it “Family over everything”. She later asked Ntobeko to say something nice to fans. Ntobeko showed he is a shy guy in real life as he struggled to say anything but “Hallo”.

Lalela questioned him more, but he insisted that “Hallo” is nice, leaving fans laughing. The real question left with fans is, is it true that Ntobeko and Lalela are related, or are they planning on making a family together?

Her father was a former Eswatini diplomat and minister, while her mother worked as an Accounts clerk. Lalela is the last born in a family of three children younger than her big sister and brother.

On the other hand, Ntobeko was raised by a couple he spoke about upon graduation.

They took me in and raised me as their own. Now I’m a UCT Bcom Economics and Finance graduate❤️