Watch Idols SA: Reactions to Somizi and Thembi’s argument, Idols SA gave viewers a cliffhanger on Sunday night as they teased a tensed argument between the judges, Somizi Mhlongo and Thembi Seete. 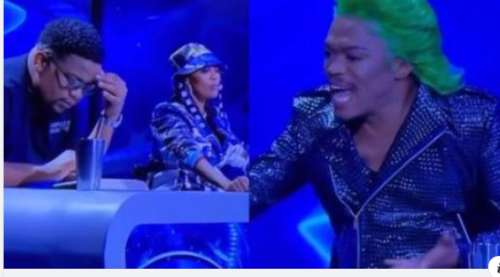 As seen in the video which has now gone viral, the actress firmly told Som that she’s not a guest but a judge, while Somizi tried airing his own thoughts, however, in the midst of their disagreement, JR Bogopa who is also a judge silently minded his business.

Social media users expressed their perception of the argument; interestingly a large percentage of people think it’s a stunt to garner more viewership for next week Sunday.

“It looks very staged Ma. A lot of Idols no longer authentically have real moments. So they add drama for views,” Refilwe Modiselle wrote.

Lady Du sought for JR’s composure; check out other reactions below:

#IdolsSA is a thing of the past, now they’re staging that dramatic argument between #somizi and Thembi to attract viewers😂 Like come-on we’re not stupid

I love Thembi, she beautiful and all but l just think she is not the right person for the judging thing. It could have been Randall, Unathi, Somizi and JR their comments are or were objective #idolssa pic.twitter.com/dhjEmdiqXh

Oh, please… We all know that Thembi and Somizi's argument scene for next week is another prank to get us to tune in 😂😂 #IdolsSA