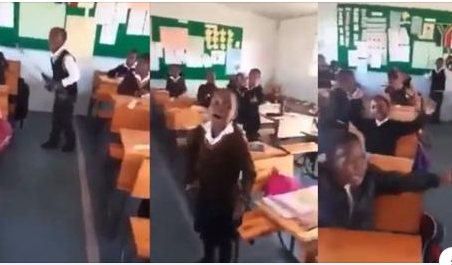 The video got Kelly trending on Twitter as people condemned the pupils and the teachers involved.

The students were recorded in their classroom as they sang a derogatory song about Kelly Khumalo by calling her the “Johannesburg b**ch who killed Senzo Meyiwa.”

“I hate Kelly Khumalo. She is a Johannesburg b**ch who murdered Senzo Meyiwa,” the lyrics of the song read when translated from IsiZulu.

I don’t find this funny at all… it’s disturbing… Regardless how the country feels about Kelly Khumalo this type of behaviour should not be tolerated… Children are like sponges, they absorb it all… pic.twitter.com/3KG7qsyffv

“Not funny at all, these kids don’t even know what they singing about. For a young kid to say isfebe to me is very disturbing.”

That Kelly Khumalo video of those kids singing? Nah, not funny!!

Imagine teaching your kids respect at home only for them to go to school and come home singing that Kelly Khumalo song……Whoever the teacher must be expelled and banned from any teaching platform…. Amanyala nje lawa🚮

“I am not the biggest fan of Kelly Khumalo but we cannot allow our kids kindergarden songs to degenerate into disrespectful grudge songs. In any event, pirates teacher’s recording this are out of order here!!”

Also Read – Good news for all those who love Zola 7