WATCH: Zozi’s Bodyguard Does Makhadzi Dirty. Singer Makhadzi just got off an international tour and attended Miss South Africa 2022 at the SunBet Arena at Time Square in Pretoria. While backstage, she got the opportunity to meet some of the industry mates but a 5-second clip threw fans off. 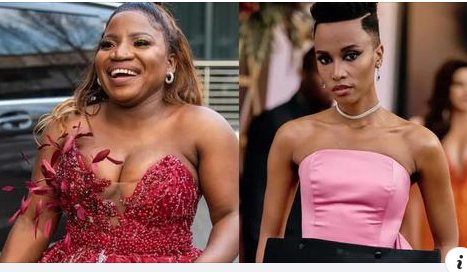 In the video shared by her fan page, Khadzinator, saw Makhadzi expressing excitement over meeting former Miss South Africa 2019 Zozibini Tunzi and the former Public Protector Thuli Madonsela, who were both judges for the finals.

When she and Zozibini hugged, her bodyguard rudely blocked Makhadzi away from Zozibini breaking their interaction. But what fans saw was an unimpressed Zozi however Makhadzi warmed the hearts of many when she did not pull a tantrum and simply respected the bodyguard’s instructions.

Watch the cringy video below:

Love love Makhadzi! Zozi should have checked her security & set him straight though… haykhona https://t.co/UWyjFpqIqf

People saw a 5 second clip and are here saying ZOZI should have checked her bodyguard. You based all that in 5 seconds?? wheeee niyathanda to put people under microscope. she probably did, but you won't know because all you saw is 5 seconds.

Zozi was not impressed with him pic.twitter.com/Ar7GskuR9G

Worse cos Zozi moved to HER! Haaibo le bodyguard 😂😂😂😂😂

Everyone backstage has VIP Access that Bodyguard knew better than to think Zozi would be in any harm why would he shove Makhadzi away like that https://t.co/EIIJku9ByZ

Not him picking the worst time to “work”. Mxm Makhadzi is probably more famous than Zozi and this dude does this?? 😂 lol pic.twitter.com/HmQK2zfxkk

Hawu chief, he was simply doing his job. It's up to Zozi to put him at ease. https://t.co/R32NLtGsta

In her acceptance speech Ndavi said: “For a girl from Gabaza to be seen, embraced and chosen to represent her country is a groundbreaking moment. A moment that reaffirms that our dreams are valid, regardless of where we come from. I am grateful for the women who have gone before me who broke the glass ceiling so I could stand here today empowered, fulfilled and ready to proudly raise the South African flag high everywhere I go and to shine the light of hope to all South Africans.