Woman strips n@ked and trashes Capitec branch. A woman let it loose in a Capitec bank in Cape Town and has since gone viral. 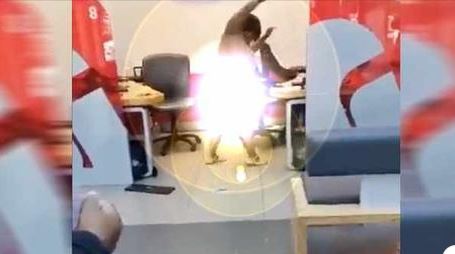 The unidentified naked woman can be seen going off at a bank consultant reportedly in the bank’s Strand branch.

In the 29-second video, the woman, dressed only in sandals, can be seen smashing a phone on the ground. Her screams are inaudible.

The male bank consultant can be seen dressed in a work uniform and moving out of his cubicle as the woman continues to dismantle his working station.

It remains unclear what the dispute was about.

As customers flee from the bank, the woman can be seen heading to another cubicle where she also destroys a workstation as she continues to yell and the consultant stationed there leaves.

The consultant can be seen standing nearby, talking on his phone.

The video, which has gone viral and trending on Twitter has Mzansi asking tons of questions.

The banking institution is yet to release a statement surrounding the matter, however, their response on social media has been the same to all who inquire as to what happened.

Capitece stated: “Hi there, we at Capitec are as perplexed by this matter which happened at the Strand branch, as everyone else. We are trying to get to the bottom of this. [sic]”

@Cellular _Jnr has urged a statement to be released by the banking institution and said Capitec needed to respond to the woman.

@marvin_H96 feels the bank is always trending for the wrong reasons.

Capitec must release a statement letter elaborating the issue of that poor lady who went to their premises naked and they must apologize not only to her but also the community… As customers of Capitec we demand to know cause the service they offer could happen to us.

Capitec is always trending for the wrong reasons. If it’s not their winding queues, it’s people who are loosing their money in unclear ways and Capitec doesn’t want to help them. People say it’s cheaper but cheap things will be expensive later in life. Capitec clean up please

While @CrocSclothing felt there was nothing funny about the video and asked fellow tweeps to consider what the woman must be going through to have gone to this extreme length.

“There’s nothing funny with the capitec video, imagine her kids seeing this video. Also consider the stress level she may be going through to end up taking off her clothes inside the bank [sic]”.