Businessman and media personality DJ Sbu’s new enigmatic look has set tongues wagging on social media, leading tweeps to believe it has something to do with Zahara’s ancestors. ‘Zahara’s ancestors are dealing with him’: DJ Sbu trolled for ‘unkempt’ look 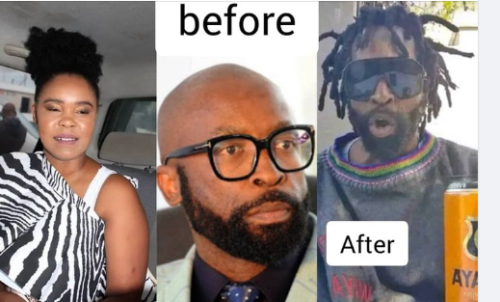 TWEEPS TROLL DJ SBU FOR HIS LOOK
Tweeps could not stop trolling the Mofaya founder for his scruffy look when one tweep post a picture of the club DJ in a dirty-looking poncho and very untidy dreadlocks.

The picture seems to be a screenshot from an episode of DJ Sbu’s podcast, Hustler’s Corner, in which he interviews fellow podcasters, MacG and Sol, who host Podcast and Chill.

‘ZAHARA’S ANCESTORS ARE DEALING WITH HIM’: TWEEPS
While some tweeps compared DJ Sbu to American rappers Jay Z and J Cole, others were convinced that singer Zahara’s ancestors were “dealing with him”.

The Loliwe hitmaker and the DJ have not been on good terms for years and it all started when Zahara accused DJ Sbu and Thembinkosi “TK” Nciza (who were her record label executives at her former label, TS Records) of exploiting her.

In 2019, Zahara claimed she did not receive royalties from her former bosses for her debut album Loliwe. The album sold over 500 000 copies and won Zahara several awards.

Even Jay-Z is not this bad.

But, according to DJ Sbu, this is not the case. In July last year, he attempted to clear his name when he took to Twitter to write:

“Ms Zahara’s money has always gone to her.”

Zahara's ancestors are dealing with DJ Sbu. It's a mess

In response, the Mgodi singer rubbished his claims and called him a liar.

“I haven’t been getting anything since I left the record label and I saw recently that my music was uploaded on digital platforms without me knowing, it means they sold my records to somebody and it means I need to get a cut for it.”

bathi Zahara’s ancestors are at war with him 💀⚰️ https://t.co/yZAlpQWrKY

He must justbpay zahara and he will be fine…🤣🤣🤣 https://t.co/nZjOIdrEpo

DJ Sbu and Zahara’s feud has been ongoing, with each party claiming the other is not being truthful. Speaking to TshisaLive last year, DJ Sbu fired back at Zahara saying he “built” himself from “nothing”.